Why Person of Interest Captured My Interest 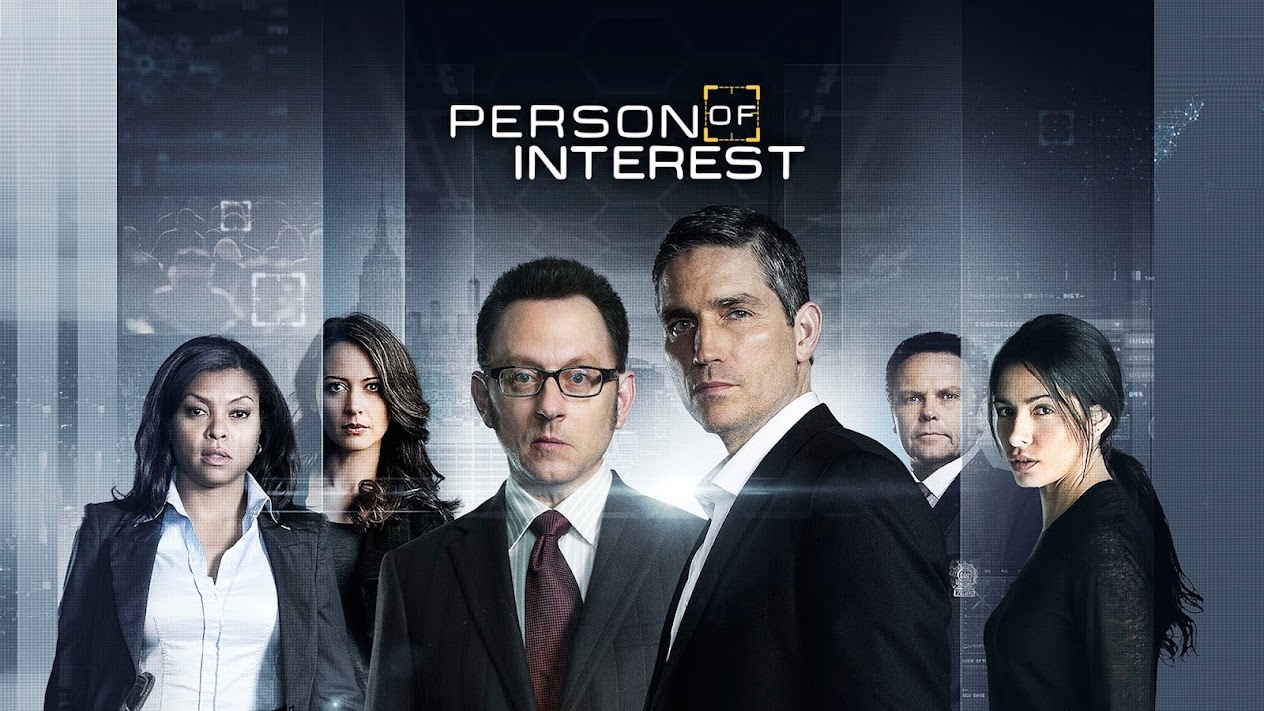 I have spent the past several weeks mainlining five seasons of the TV series Person of Interest. I can’t remember why I decided to watch it. Possibly I saw something on a Tumblr blog that piqued my curiosity about the characters (the final season wrapped up around the time I started watching, so social media activity might have been a bit higher). I kind of remember seeing the series advertised on free-to-air TV back when it started, but it never hit my radar until now. I have no idea why not, because I loved this from the very first episode.

I’ve kind of got out of the habit of watching longer form television – 22/23 episodes in a season always seems so much of a commitment in a busy life, and too often the filler episodes needed to make up the numbers are annoying and dull. But I worked my way through four seasons of 22 or 23 episodes each (and the last season of 13) with barely a blip of boredom, despite that fact that in most of the episodes in the first seasons, the formula was pretty similar – Finch and Reese get a number, they investigate the number, they save the number or foil the number’s dastardly plan. I mean, it’s pretty straightforward, right? The thing is, the plot points are really not what matters in this show – it’s all about the characters.

Initially, we are drawn into the stories of John Reese (Jim Caviezel), ex-military, ex-CIA super special agent, presumed dead, current status despondent street hobo, and Harold Finch (clearly not his real name) (played by Michael Emerson), shadowy billionaire of a hundred identities (none of which seem to actually be his) who recruits Reese to his cause – saving (or stopping) the numbers. Behind the numbers is The Machine (and if you don’t think of this entity as a character it its own right within a couple of episodes, well, just give it time…), an AI created by Harold at the behest of the government after the tragic events of 9/11. Reese and Finch both have pasts that haunt them, and these are gradually shared with us through flashbacks to years gone by. Really darn GOOD flashbacks, I have to add – Person of Interest successfully incorporates story elements with character detail in a lovely meld that advance the plot while giving us even more reasons to love our characters. While Finch and Reese get us hooked (and the genuine friendship and respect that grows between these two characters whose skills and experiences complement each other, to the point of self-sacrifice more than once, is just lovely), the reason I was totally on board for the ride is Detective Joss Carter (Taraji P Henson), who is an great character played by amazing actor and really what made this show pop for me. Her journey was what anchored me through the first few seasons, and while naturally I was delighted when other women (Root – Amy Acker (also fantastic) and Shaw – Sarah Shahi) joined the cast, Joss was always my favourite. Well, Joss and Zoe (Paige Turco), who NEVER got enough episodes! And I can’t forget Detective Fusco (Kevin Chapman), whose character arc was fabulous, and perhaps the most dramatic of all, and another favourite, mob boss Elias (who I was always going to adore, because, well, Enrico Colantoni…).

One of the things I loved about the show was the number of female characters. Not only the leads and recurring players but from the very first episode, we get women in one-off roles both as perpetrator AND victims, which was exciting to see (I know, it SHOULDN’T be so exciting to have women be heroes and villains, but it is…). This continues throughout the series, and at one point, there is parity with the male and female leads, which was very cool.

That said, I’m not blind to the problematic elements.

END_OF_DOCUMENT_TOKEN_TO_BE_REPLACED

Grace and Frankie – on growing old and growing up

I mainlined 26 episodes of Grace and Frankie on the weekend. That’s the whole of seasons 1 and 2, in one big gulp. Don’t judge me, it’s not quite as bad as it sounds – the episodes are only 25-30 minutes each, so heck, it could have been way worse, right?

I’m pretty sure I heard about this show via Galactic Suburbia first, a while back, but I was immersed in all the wondrous array of superhero, SF and fantasy shows that we’ve been deluged with in recent years and it passed me by. When I caught up on everything though, and was poking around online to see if anything looked interesting, Netflix cleverly threw if up in the “new releases” section and I thought I’d give it a whirl. I’m so very glad I did!

The basic premise for Grace and Frankie is that after 40 years of marriage, Grace (Jane Fonda) and Frankie (Lily Tomlin) – two women who have been thrown together for decades but really can’t stand each other – are dumped by their husbands (Sol – Sam Waterston – and Robert – Martin Sheen). Their 70+ year old husbands, law partners who have been having an affair for the past twenty years, have finally bit the bullet and tell their wives, now that same sex marriage is legal, because they want to get married. Naturally, Grace and Frankie are devastated (although for quite different reasons), and then the show really begins.

Obviously there is a lot for Grace and Frankie to unpack, and we see their respective processes unfold as they work through the weeks and months that follow. We also meet Grace’s two daughters and Frankie’s two sons, and see the character journeys of all these people along the way.

I love that we get loads of older actors with fabulous roles, and although I could stand to see more diverse portrayals of people of colour, differently abled people, people who aren’t remarkably fit and attractive, and even other representations of gender and sexuality (in this world it seems everyone is cis and either straight or male homosexual – where are the rest of the QUILTBAG?), the fact that this show is without a doubt firmly focussed on women means it hits a lot of buttons for me. There might be two four male stars we see on screen regularly, but we live inside the world of Grace and Frankie, and to a lesser extent Grace’s daughters, especially Brianna (June Diane Raphael), who I particularly love.

If you had any doubt that this show is made for the female gaze, the frank and open discussion of women’s issues will set you straight (all puns unintended there!). The running storyline of the “yam lube”, plot pieces like being “invisible” as older women in a shop, discussions of the career vs motherhood and the conflict between the two showcased in Grace’s daughters, dozens of little things scattered through the show that continually hat tip the female viewer; it’s surprising how much that meant to me.

Perhaps the best thing about Grace and Frankie though is that it is a show about older women which reminds us that just because we grow older doesn’t mean we stop being ourselves. Frankie is an unrepentant pot-smoking hippie chick artist who speaks her mind and overflows with love. Grace is a determined, hard-drinking, headstrong woman who built a flourishing business from scratch and worked her whole life for it. They are very different representations of womanhood (and oh, isn’t that in itself marvellous to have) and just because they are now in their 70s and can’t unfold from a sitting position with the same poise and effortlessness they once did (yes, this is definitely a thing the show does!), it doesn’t stop either of them from being the same forceful and fascinating personalities they have always been. If I am half the woman they are at 70, I’ll die happy. And I totally want Frankie’s hair…

In tone, Grace and Frankie sits for me between Modern Family and Gilmore Girls. It’s a little over-the-top to be a serious drama, and nowhere near slapstick enough to be a full comedy, but is both hilarious and tear-jerking by turns, and this is pulled off thanks to the gorgeous performances of the actors involved, some great storylines, and mostly fabulous dialogue throughout. In short (after the long), I completely enjoyed watching this, and will be looking out for the next season. Thank you Netflix – you rock.

I finally got around to watching the six-part TV adaptation of John Marsden’s Tomorrow, When the War Began (first screened on ABC3). The original book was published in 1993 (one of seven in the first series, followed up with the somewhat superfluous and repetitive trilogy, the Ellie Chronicles), and was previously adapted as a film (which I talked about here) in 2010 (and because the first version of the film Red Dawn came out in 1984, I can’t suggest it too was based on the book. The similarities are rather remarkable though, so possibly Marsden was inspired…). The first book (and often its immediate sequels) have been studied in Australian schools for most of the past twenty years, and are staples of library shelves, having won multiple awards both in Australia and overseas. I’ve read them all. I’ve seen the film (which I actually quite like as an updated adaptation, although I’ve not found too many who agree with me!), and as I always thought it better suited to a TV series than a film, I was keen to see how the show looked.

END_OF_DOCUMENT_TOKEN_TO_BE_REPLACED

Tagged as reviewing, tomorrow when the war began, TV shows

Reading a Marianne de Pierres novel is almost like immersing yourself in a brilliantly detailed film – you find yourself engrossed in not only the plot and characterisation, but in the highly visual nature of the story. It is very easy to believe in the far distant (temporally and spatially) locale delineated in Dark Space because de Pierres embeds the physical surroundings so integrally to the plot that you find the world she has created is drawn implicitly for you, without being intrusive to the movement of the story. END_OF_DOCUMENT_TOKEN_TO_BE_REPLACED

Women journey through every season of Doctor Who

I’m a fairly recent Doctor Who convert. Early last year I became hooked thanks to wanting to watch the Neil Gaiman authored episode “The Doctor’s Wife”, so started with the Eleventh Doctor, and was so enamoured I went immediately back to the beginning of New Who and devoured the lot. Of course I have memories of watching Classic Who when I was a kid, with the Fourth Doctor, K9 and the Daleks being the only real things that I remember. And despite the best efforts of good friends trying to encourage me to embrace a bit of Classic Who now, I’ve struggled. Well, after reading Chicks Unravel Time, I just want to go back in time myself and be able to watch the whole of Doctor Who from the very beginning! END_OF_DOCUMENT_TOKEN_TO_BE_REPLACED