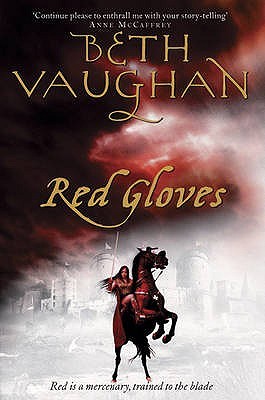 The most disappointing part of this book was the back cover blurb. It didn’t do justice to the story inside the pages and was a bit of a turn off for the seasoned fantasy reader. Hence, this book languished on the “to be read” pile for some weeks before I finally picked it up, with no little trepidation. Fortunately, the story is far better than the cover implies, and it was easy to enjoy.

Under the guise of a fantasy novel, Vaughan has spun a romance, where the main story really seems to be the growing relationship between the emotionally and physically scarred mercenary, a woman known as Red Gloves, and the mage lord who lost his power and his people, Josiah.

For me, the evolving love story worked better than the fantasy elements, which were not as fresh or believable as I would have liked. This was punctuated by seeming anachronisms (or, perhaps, Americanisms) which didn’t fit the tone of the book (such as “sexy” and “mom”). The action and plot were serviceable but at times felt forced.

I did find the mystery of the title character’s red gloves unusual, and the way this was dealt with was interesting. But what I remember best about the story afterwards was definitely the romance. With the female character taking the dominant role in the pairing, and the male having the greater emotional investment initially, it makes a nice change from the usual fare in a medieval setting, without feeling forced. Josiah is sweetly endearing while still retaining his manliness, and Red Gloves comes to regain trust and femininity through her relationship with him.

The overarching plot of regaining a lost throne with an unlikely monarch is nothing new but, as I’ve said, was well written, with enough action, magic and interesting characters to maintain pace, and the engagement of the reader.

I recommend Red Gloves as a foray into fantasy by readers who usually forage in the historical romance shelves of bookstores; long time readers of the genre may not be as enamored but newcomers and part-time readers will enjoy. 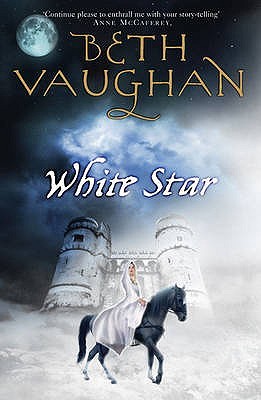 White Star is the follow up fantasy romance to Red Gloves, Vaughn’s debut novel of 2008. Fantasy romance is not a phrase I have used before, but that’s completely how I felt reading this book. While Red Gloves had a romantic element to the story, the plot and magical parts of the story outweighed the romance so that it became much more usual fantasy fare. White Star has a different balance altogether.

The Lady High Priestess Evelyn is a healer, trained in many of the magical arts, but dedicated to serving others. Orrin Blackhart appears to be at the opposite end of the human spectrum, known as a murderer and mercenary of the darkest sort. When Evelyn’s goddess insists she save Blackhart from a death sentence, neither could be more astonished. And a bond begins to grow between them.

But there are other forces at work, and Evelyn finds herself out of favour and sent away from those she loves, while Blackhart is sentenced to rid the land of the zombie-like creatures left behind when his previous employer was killed. Even now, they are fated to work together to not only destroy the walking dead, but save the country from those working from within to tear it apart.

When I was reading White Star, I was frequently put in the mind of the historical romances I read as a teenager – overwhelming odds stacked against two protagonists, the clearly misunderstood dark hero, the somewhat naïve but still wonderfully endowed (with brains, I mean!) heroine, thrown together by forces outside themselves, seemingly incompatible but somehow turning out to be the other halves of each others’ souls… And while this book is well written, with a bit more polish than it’s also enjoyable debut predecessor Red Gloves, it almost felt like I was reading a romance under false pretences – it was a bit obvious.

I still enjoyed it, but hard core fantasists might choose something a little more edgy and a little less fluffy. However, for transition readers, or those new to fantasy, this might be just what you’re looking for!

And the winner is…

Liz Barr! Congratulations Liz on being the 2016 NAFF delegate to attend Contact 2016 in Brisbane next Easter!

Scattery all over the place

I’m trying to get things done this week, and I’m being successful in dribs and drabs. I scrubbed the floor in the bathroom (as in, with a scrubbing brush and bleach – who knew how satisfying that task could be??) and the living areas are all looking presentable. The washing and folding is up to date, with a basket of ironing beckoning me today. I’ve caught up on blog post scheduling and review writing, have made a little progress on some publishing things that are underway, and am on target to meet my Goodreads Reading Challenge goal (look, graphic novels count in my tally, and I am happy for them to do so!).

So far, I’m calling that a win. Lots of publishing tasks need to be done but I’m chipping away at those. I also need to do some prep for my library class next year, as I’ve got to rewrite a bunch of assessment to meet VET competency criteria. But this week is just about Christmas – am very glad I was pretty prepared gift-wise, and Miss 10 and I wrote up a shopping list to pick up a few food things we’ll need for Christmas meals, which we’ll pick up tomorrow. Another quiet Chrissy at home for us – lots of lolling about the house I reckon!

Filed under Me, Uncategorized

Welcome to the NAFF race for 2016. The National Australian Fan Fund (NAFF) was created to assist fans to travel across Australia to attend the National Science Fiction Convention (Natcon). NAFF assists fans to travel to the Natcon and covers the costs of airfares and accommodation. The Natcon donates a convention membership. This year’s NAFF race is to the 55th Australian Natcon, Contact, which will be held in Brisbane during Easter, 25– 28 March 2016. It is expected that the winner will produce a report of their trip, engage in fundraising to support future NAFF races, and to help administer the NAFF race for the following two years. All Australian fans are eligible to vote.

The voting process contributes to the fundraising so each vote costs $5. You are more than welcome to donate more than this amount! Votes are being collected by: Tehani Wessely and the candidates. For more information please contact Tehani at editormum75@gmail.com.

You can vote online here with just a few clicks.

Your candidates for this year:

Since 2013, I’ve been a member of the organising committee for Melbourne’s Continuum convention, serving in the capacities of programmer (C9, 2013); membership officer (C10, 2014); and chair (C11; 2015). With Stephanie Lai, I’ve blogged about fandom, media, social justice, childhood nostalgia trips turned dystopian nightmares and assorted Australiana at no-award.net since 2013.

I have a strong interest in developing and promoting an intersectional and accessible feminism in fandom, promoting Australian genre media, particularly for young adults and children, and also advancing a sinister squid-related agenda and the return of Harold Holt from his watery domain.

I’ve been a SFF book geek ever since reading The Hobbit at age five. Currently, I run a book blog at Earl Grey Editing and am just starting my fourth term as the Secretary of the Canberra Speculative Fiction Guild. Over the years, I’ve volunteered with Dewey’s 24-hour readathon and Conflux. I’m an unabashed roleplayer and reader of fanfiction.

I love to connect communities and to create positive relationships between fans and creators. I’ve attended many Confluxes but would like to attend a convention with a stronger focus on fans (and to geek out over books with Kirilee Barker).

I love the speculative fiction community – whether cos playing, attending cons (especially Conflux), judging on the Aurealis, supporting authors at book launches or being a friendly face for all who choose to be part of Australia’s vibrant community. I blog, I read a lot, I write and I love to support and really get to know people. I’ve never been to Contact before, and I’d love to hear the passion of others and share my passion right on back, especially at something at important as a natcon. NAFF would provide me with the financial support to make that happen.

Blogging, what is it?

i had occasion today to take a trip down memory lane through the archives of this blog. Well, actually most of the archives were those transferred from WordPress a couple of years back, when LiveJournal was dying, but regardless of that, they are MY archives. It was a fascinating exercise in cringe (did I say THAT?!), memory loss (did I even WRITE that?!) and a little bit of chuffed (huh, THAT was actually pretty good…). The thing that struck me the most, though, was the sheer number of posts. I started blogging at LiveJournal in 2007 and for several years posted several times a week. There’s memes, book reviews, con reports, family posts, publishing stuff, everything. Now? The last time I updated this blog was April, at the end of the holidays. The FableCroft site gets more attention (that’s business), and the school sites I run get a little, but not a patch on those halcyon days of yesteryear.

﻿Why is that? I blame Twitter. Facebook to, to an extent, but i think it was after joining Twitter that I stopped blogging with any frequency. To be fair, the apparent death of LJ didn’t help, because blogging within LJ gave a different sense of community to WordPress, one that I think Twitter emulates in many ways. So a combination of those elements, I suppose. Add to that I now use Goodreads to record my reading/reviews, and Facebook to keep up with family and friends, blogging really doesn’t serve the same purpose anymore. Social media has moved on, and will, I’m sure, continue to do so. Twitter will no doubt be superceded some day, just as LJ was. Facebook will is under the weight of public disdain, as did MySpace. I wonder where we’ll be finding our communities in 10 years from now?