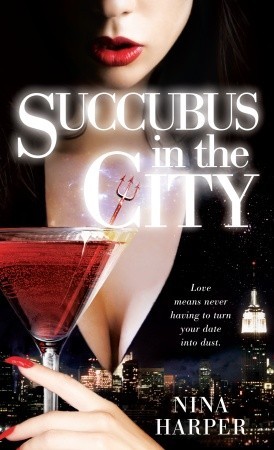 With paranormal fiction all the rage, it’s no wonder that authors decide it’s a good idea to cross fandoms. Well, kind of. Succubus in the City is pretty much Sex in the City, with demons. Much of the book is given over to discussions of how wonderful it is to be young and good-looking in New York City, particularly if you’re a demon, and happen to be one of Satan’s best friends, and while this works to a certain extent, I wanted to see more story than setting, and was left wanting in the end.

Lily, our main character, is one of Satan’s favourite girls, a succubus whose only duty is to have sex with men of sin (just about anyone really) and send them to hell. However, for whatever reason, Satan’s minions also hold down day jobs – in Lily’s case, a prime position with a fashion magazine – and not only do their paranormal duties, but work in the real world as well. Sure, there’s perks to both jobs, but really? Why would several thousand year old demons want to work two jobs? I’m pretty sure it was for the shoes, but I digress. Lily’s many centuries of sex working have finally waned in their appeal, and she now yearns for the love and companionship of a human man, and a “real life” along with it. Unfortunately for her, the details of her contract with Satan mean that she can only be released from service if someone who knows her true nature truly loves her. Not likely, right?

Lily and her girlfriends find themselves embroiled in a situation where it seems their demon natures will be exposed, and Lily is set to work to find out where the situation stems from. Amongst it all, she meets private investigator Nathan Coleman, and Lily begins to fantasise about a possible true love. But Nathan may not be everything he appears, and Lily must discover the truth about his background, and about how much he really knows.

I’m not a fan of Sex in the City – I don’t think I’ve even seen one full episode of the show, and that may be why Succubus in the City really didn’t appeal to me. The endless name dropping of places and brands, and the motions associated with shopping and eating out filled up more of the book than the core of the story itself, to the point where I was left completely unsatisfied by the ending. The book is marketed as a standalone novel (no mention of series anywhere on the cover or endpapers), but the story is incomplete and thus must be part of a series, which is frustrating for the reader. However, others may enjoy the character of New York, and if you’re looking for something more chick lit than paranormal, this might suit you.

Have your say Cancel reply