We would like to thank everyone who nominated our “New Who in Conversation” series for the William Atheling Jr Award again this year – it’s a great honour to be on the ballot! Voting for the annual Ditmar Awards (which the Atheling is included in) is open to all members of  Continuum X (2014 Natcon – Melbourne) and Conflux 9 (2013 Natcon – Canberra), and can be done online.

So, this is where I came in. I started with Matt Smith, and I’m a devotee, and this season is just fantastic in so many ways, mostly because he IS the Doctor. I started here, so I don’t know if I would have become a Doctor Who convert if I’d started with Eccleston or Tennant instead, but even though I love them both too, Matt Smith is still my favourite New Who Doctor. He subsumes the pain and sorrow we saw very clearly in Nine and Ten, but still manages to use it even when he’s hyped and manic and child-like, which I adore. Season Five is a heck of a ride, and I loved it!

Little Amelia Pond and grown up Amy are brilliant. I don’t think Amy always gets the best character stuff early on, but she grows and changes and the character becomes so much more than we could have hoped for after the first episode, and Gillan bounces beautifully off Smith, which is completely adorable. 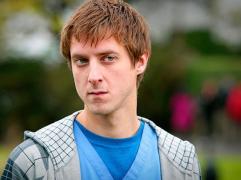 Rory is possibly my favourite companion ever, partly because he’s such a bumbling yet completely competent person, partly because his devotion to Amy is just gorgeous (even though he’s clearly well aware of her flaws) and partly because he too gets to grow and change over the course of the season. And get killed. A lot.

Hmm, wait, did I say Rory was my favourite? I meant River! Tough yet in some ways fragile, cynical while absolutely still wide-eyed about the universe, and mad about the Doctor while completely understanding all the issues that position contains! She’s awesome, and I adore her. Um, yes, maybe I adore them all, and this season is my favourite ever?

What is your favourite episode of this season?

Just ONE? Urgh. Um, hmm, “Eleventh Hour”, because that’s where it all begins? “Vincent”, because it always makes me cry? “The Time of Angels/Flesh and Stone” because angels and River and SET UPS??! If I have to pick just one, I think I’ll go with “Vincent”, because I can watch it over and over and love it every time.

“Vampires of Venice”. It grew on me a bit, discussing it in our review this time around, but it’s a low point in a really great season, for me.

Describe this season in one word!

Classic Who Conversation podcast – Genesis of the Daleks (1975)

The Specials: “The Next Doctor / Planet of the Dead / The Waters of Mars“

The Specials: “The End of Time”

Tagged as Doctor Who, reviews